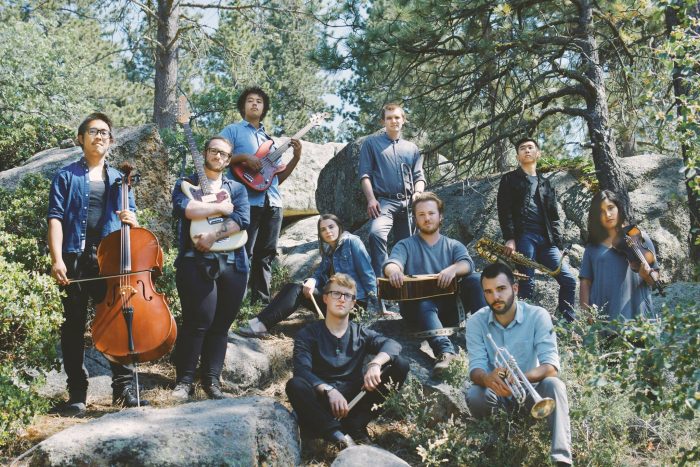 When songwriter Jake Abernathie and drummer Flint Lidar first met in 2009, their love of music formed a strong friendship between them, but it wasn’t until later that autumn when the Yucaipa-Pendleton Fire forced them and their families out of their homes for several days that they began to creatively collaborate. With nothing to do but watch their hometown smolder, the two spent their time writing music, and thus Leather Tramp’s predecessor, The Pendleton Project, was born. The project grew in size, recruiting several other locals in the area, including vocalist Sydney Funderburk. Pendleton often performed in the Inland Empire, but also reached the Los Angeles area as well. During these shows, strong ties were made with a nearby Beaumont-based band, fronted by Lucas Cathey, and the two groups would often join forces in their proceeding performances.

But The Pendleton Project eventually dwindled in numbers; some bandmates moved away due to schooling, and Jake and Flint’s musical pursuits separated. The two began playing in several side projects, and nearly two years passed before they resumed their collaborative efforts.

In the summer of 2013, after a short and spontaneous Pendleton Project reunion performance at a local mic night, Jake decided to start putting together a new group: Leather Tramp. Feeling as though many of the songs he wrote while leading The Pendleton Project, among other pieces written after, never reached their full musical potential, he composed and arranged several of his songs for the massive ensemble that became Leather Tramp. Originally this attempt was designed to be a one-time show, hoping to convey his vision of his music (at least once) for his small hometown of Yucaipa. Planning with former sister-bandmate Lucas Cathey, who booked bands at the local venue, Jake recruited him, former Pendleton members Flint and Sydney, and a small army of musicians for the singly planned debut of Leather Tramp. The search for orchestral members in Southern California was no easy task, but the group managed to focus its efforts just in time for its grand performance in early August. Expecting the band to disperse as quickly as it had formed due to its logistical challenges, Jake was surprised to find that many of the players called upon for the one-time event wanted to know when the group’s next performance would be.

Leather Tramp continued to thrive from that point on, and was joined by an array of the debut performers, including trumpeter Chandler Riley, trombonist Gary Soland, violinist Laura Bedol, and violist Ashley Wright. With Jake and the majority of the members studying music at California State University of Long Beach, the band began performing in the Los Angeles and Orange County areas, eventually recruiting keyboardist John-Michael O’Brien, bassist Marc Encabo, and cellist Cole Syverson. Bringing a unique mix of performers to the Greater LA area with their eleven member troupe, Leather Tramp packed stages with surprising agility and ease, showcasing their versatility as an ensemble as well as their talent as individual musicians.

Now joined by violinists Miko Shudo and Elizabeth Chavez, and woodwind doubler Lawrence Pi, the dozen continues to perform around Southern California, taking the stage at multiple music festivals, venues, and showcases while turning heads with their dynamic sound.