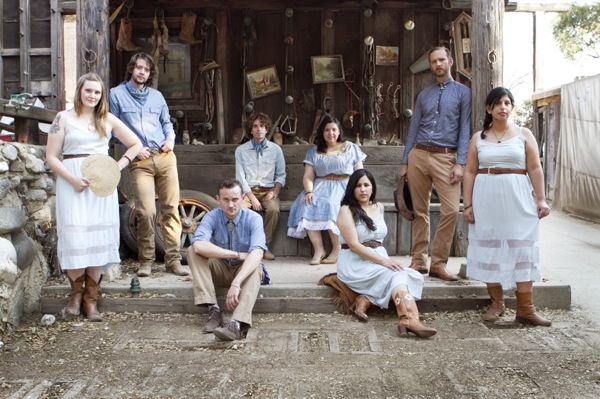 The Eagle Rock Gospel Singers began as a collective of friends getting together in the summer of 2010. A choir of up to 15 revived the old gospel spirit with songs like “I Shall Not Be Moved”, “12 Gates”, and “In My Time of Dying”. Slowly they evolved to a band of 7, committed to keeping the spirit of gospel music alive. Influenced by both past gospel musicians such as The Dixie Hummingbirds, Washington Phillips and Sister Rosetta Tharpe as well as current bands like The Black Keys, Wilco, and Calexico, the band is creating a unique style of blues, indie rock, folk, and bluegrass. Some of the band’s favorite things include banjos, kickdrums, hand clappin’, foot stompin’, and sing-alongs.

The band has released two EP’s produced by Matt Wignall (Cold War Kids, J. Roddy Walston and the Business, The Fling) with songs that “pulse with the energy of the pre-rock ‘n’ roll era, when gospel greats raised their voices to the sky” (Buzzbands LA). Both EP’s can be found at eaglerockgospelsingers.bandcamp.com.

Currently, Eagle Rock Gospel Singers can be seen at various Los Angeles venues such as The Satellite, The Echo and the Troubadour and participated in Newport Folk’s first west coast festival Way Over Yonder late last year.